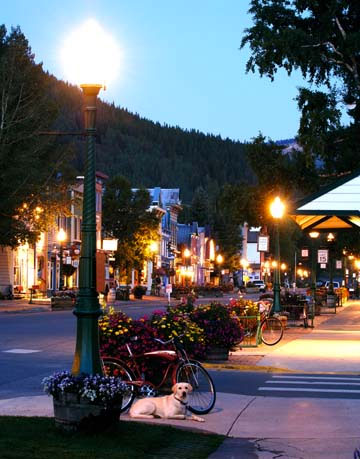 It is November and the first heavy snow is falling. By tomorrow we will have a foot or two of new powder. On the mountain several runs are already open, thanks to the amazing snowmaking machines. I sit in our sun room, looking out at winter, and think back two decades to that afternoon in March. Half an hour earlier we had gotten off the plane from Denver. We were riding the Alpine Express up an increasingly snowy valley flanked by mountains covered with conifers and aspens.

At the 22-mile mark from the Gunnison airport we reached a spectacular scene. The valley turned flat and a mile wide, with big cottonwood trees lining the little river. Hundreds of furry Herefords were strung out along the snowy pastures, eating hay that the ranchers must have rolled out that morning. Ahead of us, Mount Crested Butte rose to a lofty crest. By tomorrow most of us would be up on the mountain’s far side, skiing down groomed trails through groves of big firs and pines.

The landscape became yet lovelier as our bus continued north. To the right of Mount Crested Butte rose the 13,000 foot pyramid of Teocalli, named by an 1874 surveyor who thought it resembled an Aztec temple. On our left rose white Whetstone, named for its sharp granite ridges. Best of all, we could see far ahead of us–ten miles and more ahead–a chain of dazzling white peaks that thrust far up above tree line. And then, just ahead of us and surrounded by all these mountains, we saw the Victorian buildings of the town of Crested Butte.

That March afternoon was twenty years ago but the scene still dazzles me, winter and summer. Sometimes I think how that line of mountains must have looked to the archaic hunters who came ten thousand years ago to these Elk Mountains, west of the main range of the Colorado Rockies. Later the Utes made this their summer home; then came the whites. Silver miners moved in by the thousands in the 1880s, and in summer we still find their abandoned shafts in amazingly high places. The price of silver collapsed in 1893 and scores of Colorado mining towns were abandoned. Not so Crested Butte, which had started mining coal and kept on doing so until 1952, when the Big Mine closed and the railroad shut down.

Many people left, but their modest and well-proportioned houses remained. Hippies moved in, many to stay and become business people. In the 1960s the first ski lifts were built on Mount Crested Butte. Older and more staid types began to arrive, buying and restoring the miners’ old houses. Now the town is a National Historic District with strict building regulations, so that we see harmony in architecture and no oversized mansions. Nor is the town of Crested Butte oversized: 1700 permanent residents plus a considerable number of second-home owners (including some of us Virginians).

Most people who come here to ski take the bus two miles beyond Crested Butte to a second town, called Mt. Crested Butte, which surrounds the base of the ski area and is a place of two hotels and more condos and larger homes. In 2004 the skiing company, Crested Butte Mountain Resort, was bought by Tim and Diane Mueller, known for their good management of Okemo and Mt. Sunapee in New England. The Muellers have undertaken a $200 million program of modernization and expansion, including new lifts, a new base area village, and a Mountaineer Conference Center.

This is not a place for everyone. It is too far from Denver or other cities for most urbanites to come just for a weekend. It is also high country. The town of Crested Butte is nine thousand feet above sea level; the ski base area is four hundred feet higher; the Silver Queen lift, one of four high-speed quads, takes a skier in a few minutes from the base area to 11,400 feet. A visitor coming from sea level is well advised to avoid strenuous exercise–as well as alcohol and salsa–for at least a day after arrival.

The Muellers have modernized snowmaking on the mountain, but in addition Crested Butte is favored by nature with ample powder snow. Annual snowfall averages around 300 inches, three times that of the Val Gardena, my favorite valley in Italy’s Dolomites. 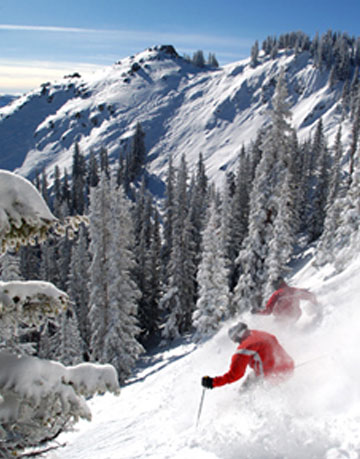 From the top of the Silver Queen a good skier can go up into the black–up, if you are really an expert, even to the mountain’s peak, double black territory, 12,162 feet. Crested Butte has the most lift-serviced extreme skiing terrain in North America, and at the end of every winter it is host to the U.S. extreme freeskiing championships.

This is however also a mountain for family skiing (and snowboarding), with hundreds of acres of beginner and intermediate terrain. And when it is not snowing, most often the sun is shining; this is a bright place.

At 75, I spend most of my winters here cross-country skiing, and ice skating. The Nordic Center in Crested Butte is a block from a stop on the free bus that links the two towns. Public skating at the outdoor rink is free, and skates can be rented, but skaters need to check the schedule since the town’s several hockey teams often have afternoon practice. 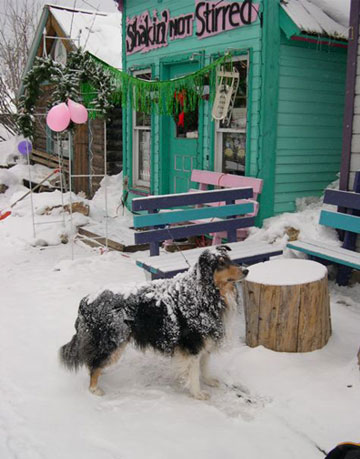 The Nordic Center maintains a 50-kilometer network of groomed cross-country trails, and there are also several ungroomed routes for skiers, and snowmobilers, that go out of town on unplowed roads. My favorite is the three-mile route (for skiers and snowshoers only; no snowmobiles) from the far end of Mt. Crested Butte to the old mining town of Gothic. This is the summer headquarters of the Rocky Mountain Biological Laboratory; the only winter inhabitant is a caretaker. On a sunny day it is a fine thing to sit outside the old Gothic store, eat one’s sandwiches, and gaze up at the pinnacles of Mt. Gothic three thousand feet above.

Spring comes late to the high country. Skiing on Mt. Crested Butte ends in April. The weather is pleasantly warm by May, but all that snow takes a long time to melt and a few hardy locals trudge up mountains and ski down. I have skied out the Slate River road in May, and had to take off skis three times to traverse mud patches. Spring is not a season when many visitors come…but then in June arrives the glorious summer. 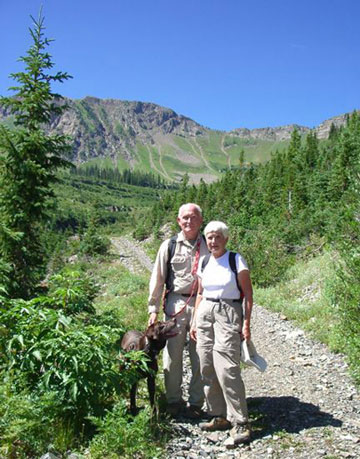 As June gives way to July the wildflowers bloom, in such profusion that in 1989 the Colorado legislature declared Crested Butte the wildflower capital of the state. The town’s Wildflower Festival takes place over the course of a week each July, and features almost two hundred events. If you want to attend a workshop on butterflies or birds, you can do it here. If you want to hike to twelve thousand feet and see graceful columbines (and many other species) blooming all around you, the Festival will arrange that, too.

There is a surprisingly rich cultural life at Crested Butte, mainly in summer. The Crested Butte Music Festival, which offers programs in July, brings top performing artists from around the country for concerts at the modest-sized Center for the Arts and, sometimes, in the high-ceilinged old Union Congregational Church, built in 1883. There are free Alpenglow concerts on the lawn next to the Center, on Monday evenings. The Public Policy Forum brings distinguished speakers to town, weekly throughout the summer. August, when the mushrooms sprout in the woods, also brings the Crested Butte Mushroom Festival which teaches visitors about exquisite chanterelles and hawkswings–as well as poisonous species to avoid.

Let us be clear on one thing: physically fit people tend to get more out of this place. One can sit and admire the mountains from a bench on Elk Avenue, or from a car out on the summer roads, but to me there is nothing better in life than walking an hour or two up to Scarp Ridge or the long green alp atop Mount Axtell, to sit and see high peaks all around. Three quarters of the land here in Gunnison County lies in the Gunnison National Forest, one of the 150 national forests created by President Theodore Roosevelt, the kind of conservative I admire. While much of this forest is open to mountain bikes and even offroad motorcycles, there are over a thousand square miles of designated wilderness in the Gunnison and two adjacent National Forests, where humans can come only on foot or on horseback.

This remains a smaller place than glittering Aspen, which is several hours from Crested Butte by car but not so many miles as the crow flies–or the hiker hikes. We and our friends like to hike to Aspen every summer, starting at a trailhead ten miles from Crested Butte. The trail soon goes into wilderness, where the open mountain slopes are covered with a myriad of summer flowers. We can hope to see deer, perhaps a golden eagle, sometimes Rocky Mountain sheep, or a few hundred domestic sheep being watched over by Peruvian shepherds. In less than three hours we reach West Maroon Pass, at 12,500 feet, and stop for lunch. Beyond and above us are the great pyramids of the Maroon Bells, two of Colorado’s 54 “fourteeners,” peaks above fourteen thousand feet. We come down from the pass into more high grass, then forest, then Maroon Lake and the free bus to Aspen. One night in Aspen, and next day we happily walk back.

When September comes here, summer has ended. In July and August we have had daytime temperatures as high as the low eighties, Fahrenheit. By early September the daily maximum is around seventy degrees. At night the black bears come into town. Town government requires bear-proof trash cans but still the bears come, trying to find twenty thousand calories a day to store fat for the winter. A black bear is a large creature, and a mother guarding a cub or yearling can be dangerous, but so far Crested Butte has had no bad encounters. Soon the bears will–we hope–go up into the forest to doze the winter away. The coyotes and foxes will keep coming into town, on late-night foraging expeditions. I saw a beautiful fox, a vixen I think, yesterday at dawn, sitting a moment in our alley. Then she ran, and I smiled, thinking of the poem by Sir Thomas Wyatt, “They flee from me that sometime did me seek….”

September brings the glory of the leaves. Much of the forest on these mountainsides is made up of aspen groves. An aspen grove is a single living thing, a colony with linked roots, and in September the groves turn gold together and not as single trees. It is a bright gold, that contrasts with the enduring green of the neighboring conifers. Soon the big cottonwoods along the town streets and the river banks turn their own shade of gold.

It is not a gold that long endures, on either cottonwoods or aspens. The leaves fall; temperatures drop further. One September morning, after it has rained all night, we wake up to sunshine and see that it has snowed up on the peaks. The hiking is still good but soon again it will be a different world, no longer green and gold but white and silver.

I have known all four seasons, in and around Crested Butte. Spring is not unpleasant, but admittedly it is a time of mud. That leaves the rest of the year: three nigh-perfect seasons.