Notes From Italy: Looking Back at Mussolini 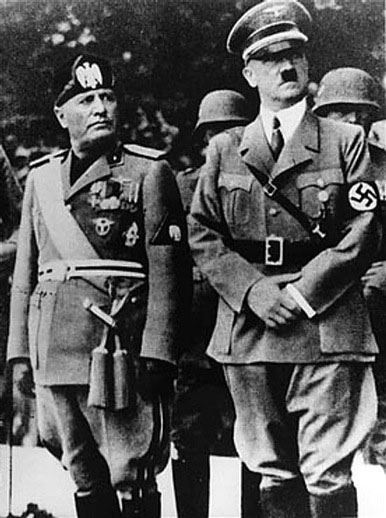 Benito Mussolini and Adolf Hitler stand together on a reviewing stand during an official visit to occupied Yugoslavia.

Benito Mussolini, the Duce, the great Leader, died ingloriously in 1945. Many still remember the photos of the mutilated bodies of Mussolini and his mistress, Clara Petacci, hanging upside down at a Milan filling station. He was in retrospect a buffoon, a fool; the historian Denis Mack Smith called him a stupendous poseur. The ideology of fascism amounted to bluster and force. This Duce was good at publicity but he did not know how to manage an economy. A light shone late in his study so people would think he was hard at work, but he was probably dallying with Clara. He claimed that he controlled all Italy from “82 keys on the switchboard of my desk,” but he did not even know that his generals exaggerated the number of their combat-ready divisions, and he led Italy into a disastrous war.

Before that, though, in the 1920s and even into the 1930s, many leading Europeans and Americans paid honor to the Duce as a wise leader. When Mussolini waged terrorist war against Libyan nationalists in 1927, Winston Churchill said he rendered a service to the whole world. Richard Washburn Child, a novelist who was American ambassador to Italy when Mussolini took power, later ghostwrote Mussolini’s “autobiography,” praising him in the book’s preface as a man who, like few in history, had created a new state with a dynamic program.

Mussolini was not the only dictator of his time. In his Europe, in a time of worldwide economic depression, a whole series of governments were run by “strong men.” Besides Mussolini in Italy and Hitler in Germany, there were authoritarian regimes if not dictatorships in the 1930s in Bulgaria, Estonia, Greece, Hungary, Latvia, Lithuania, Poland, Portugal, and Spain. There were Blueshirts in Ireland, Blackshirts in Britain, and Vidkun Quisling’s followers in Norway. At the eastern end of Europe lay the greatest dictatorship of them all, Stalin’s Soviet Union.

Italy was no Estonia; it was a major country. Its leaders had hoped it might even become a great power when in 1915 it betrayed its allies, Austria and Germany, to go to war against Austria after Britain and France promised the Italians new territories if they would join them. After losing seven hundred thousand men in the war, Italy as a victor was able to push its border up to the Brenner Pass but remained a poor and inequitable, largely rural society. Mussolini came to power in 1922 after convincing top people that he could be a bulwark against the radicalism of the Socialists, his old party, and the new and even more radical Communist party. Three years later the main opposition leader, Giacomo Matteotti, had been murdered, the parliamentary system had been destroyed, and Italy was a one-party dictatorship.

Fifteen years later, as the world neared World War II, the Duce could point to a number of accomplishments. He famously “made the trains run on time,” and in addition he built a couple of new high-speed lines, electrified others, and made a stab at building superhighways. He drained the Pontine marshes south of Rome, ridding the area of malaria and providing a better life for some thousands of poor peasants. The army was not what it claimed to be, but the navy was modern and the fourth-largest in the world. Air Marshal Italo Balbo made headlines when he flew two dozen naval seaplanes across the Atlantic without mishap to the 1933 Chicago World’s Fair. (There are probably no Duce Streets in America, but Chicago still has Balbo Drive.) The Italian Line put a couple of beautiful passenger liners into service. And the Italian people, or at least most of them, admired their Duce. Many of those who did not were jailed or exiled.

Mussolini did well with wars, too–at the beginning. He conquered poor Ethiopia in 1935-36, and occupied little Albania easily in 1939. Then the trouble began. Hitler invaded Poland in September 1939, and the Duce decided that Italy must be at Germany’s flank if it was to gain its share of territory in the greater war coming. In June 1940 Italy invaded its neighbor and old ally, France, just as Germany was completing its defeat of France farther north. The French put up a surprisingly effective resistance to the Italian invasion, and the Duce was humiliated. He was also, as Mack Smith says, increasingly unhinged.

One may well wonder what lies behind the mental state of a leader who takes his country into foolish wars. Mussolini had never been a heavy drinker, nor did he use drugs–but it seems likely that he suffered from syphilis.

The Duce followed up on his invasion of France by attacking the British in Egypt and invading Greece from Albania. The Italians got far into Egypt but were then repulsed; the Greek army was outnumbered by the Italians but successfully counterattacked, and the Italian army had to be saved by the Wehrmacht. Mussolini told his foreign minister and son-in-law, Galeazzo Ciano, that the trouble was the human material he had to work with, the mediocre Italian race. This did not stop him from sending a force of 200,000 Italians to help Hitler invade the Soviet Union in 1941. Despite what Mussolini said they were good soldiers; they were not equipped for the Russian winter. One battalion of the crack Julia division lost 45 of its 48 officers and 1221 out of 1384 soldiers.

There was often a lack of consistency in Fascist policy. Perhaps in some cases this was just as well. Mussolini, for example, once had a Jewish mistress, Margherita Sarfatti, who helped him appreciably after he seized power, as editor of the journal Gerarchia, the semiofficial voice of the regime. In 1938 the Duce emulated the Führer and promulgated cruel anti-Semitic laws; Sarfatti fled to Argentina. Several Italian Jews useful to the regime were however “Arianized,” including a general, Umberto Pugliese, and Maurizio Rava, an early Fascist who was made the colonial governor of Somalia. Even in 1938 Mussolini told his education minister, Giuseppe Bottai, that he did not want to persecute the Jews; perhaps they could be settled elsewhere in his empire, e.g. Somalia. That did not happen; most Jews remained in Italy, where the anti-Semitic laws were not always effectively administered; but most Italian Jews lost their jobs and livelihood and many died later at the hands of the Nazis.

What did American leaders think of the man whom Charlie Chaplin parodied as Benzino Napaloni, dictator of Bacteria, in his 1940 film The Great Dictator? For the first decade of Mussolini’s rule, Washington was pleased that Italy welcomed U.S. investment, agreed to settle its war debts, and signed the 1928 Kellogg-Briand peace pact and the 1930 London treaty limiting warship construction. Later the U.S. was distressed by the Italian invasion of Ethiopia, but applied no sanctions. President Franklin D. Roosevelt continued to think he might work with Fascist Italy to help prevent war, but by 1939 the Duce was telling Ciano scornfully that messages FDR sent him were “the fruit of progressive paralysis.” Ciano was not so scornful; he wrote in his diary that while America for now was pacifist, events could change this–and they did, at Pearl Harbor on December 7, 1941.

It is not inconceivable that after Pearl Harbor, Italy could have stayed out of war with the United States. Four days after the Japanese attack, though, the Duce strutted out onto his balcony at Palazzo Venezia and told the crowd in the square below him that he was declaring war against America. Bottai, the education minister, wrote in his diary that it was not a crowd that had rushed enthusiastically to hear the Duce. They had been rounded up from ministries and schools, and after the Duce’s final “We will win!” they quickly dispersed. Why go to war against the Americans?

Just over a year and a half later, in July 1943, U.S. and British forces, which had earlier pushed the Italians and Germans out of North Africa, invaded Sicily. A meeting was called in Rome of the Fascist Grand Council, and a majority of Council members approved a resolution calling on the King, Vittorio Emanuele III, who had often seemed timid and subservient, to take over command of the armed forces from Mussolini. When Mussolini went home from the long meeting, early in the morning, his long-suffering wife Rachele told him he should arrest as traitors the men who had voted against him. (They included his son-in-law, Ciano.) Yes, said the Duce, but first I must go see the King. When he did so, later in the day, the King thanked him for his services and dismissed him–and a Carabinieri colonel took him into custody.

Two months later, in September 1943, an operation led by a daring Waffen-SS officer, Otto Skorzeny, rescued Mussolini from the mountain hotel where he was being held. Hitler installed the former Duce as head of a puppet regime in northern Italy, the Italian Social Republic. There, several of those who had voted him down in the Grand Council were executed, including his son-in-law. Ciano’s wife, the Duce’s daughter Edda, made her way to Switzerland with help from a good friend, the designer Emilio Pucci. Edda carried her husband’s diaries under her skirt. They were soon published, and along with the accounts of Giuseppe Bottai and a few other insiders–including a recent little memoir by the Duce’s son, Romano–they help round out the picture of a man with so many faults that one wonders how, for so many years, he could keep his nation in thrall. But the Duce was not the only modern emperor who turned out to have no clothes.

What remains of the Duce? Curiously, the Italians have never taken down a tall white obelisk on the Tiber–near the building that now houses Italy’s foreign ministry but was designed as Fascist party headquarters–that bears the inscription “MUSSOLINI DUX.” And one sees still, across the country, many buildings built in his time that bear the date of construction both in years after Christ and in years since the foundation of the Duce’s new Roman empire.

There is also a path to be traced in modern Italian politics from the Fascist party, outlawed after World War II, through the postwar neo-Fascist Movimento Sociale Italiano or MSI, now extinct, to the party known today as the Alleanza Nazionale or AN. The AN’s leader, Gianfranco Fini, served as Italy’s deputy prime minister and minister of foreign affairs in 2004-2006, in the last center-right government headed by Silvio Berlusconi. Fini says he and his party are not neo-fascists but post-fascists. That seems clear; the day of Fascist thugs is long gone in Italy.

What is not clear is whether Italy, which has now enjoyed six decades of democracy and has become one of the richest countries in the world, can be sure it will not someday fall prey to a new demagogue, more clever and sophisticated perhaps than the old Duce. Indeed, what country has such guarantees? Many Italians were seriously concerned over Berlusconi’s control over the mass media when he headed the government for five years. Italy has three state-controlled television channels–and Berlusconi, a self-made billionaire, owns all the main private channels as well as Italy’s largest publishing company, Mondadori, plus cinema and home video companies. No doubt Berlusconi learned much from that homeland of media conglomerates, the United States of America.

Peter Bridges is a former ambassador to Somalia, and cofounder of the Elk Mountains Hikers Club in Colorado. He is the author of “Safirka: An American Envoy” and “Pen of Fire: John Moncure Daniel.” He is currently writing a biography of Donn Piatt, diplomat, soldier, and editor.